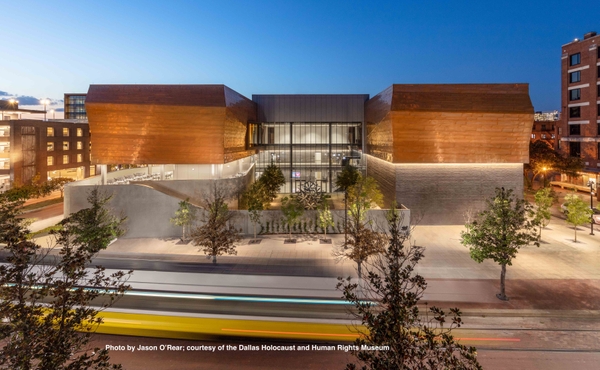 The Dallas Holocaust and Human Rights Museum has joined the Dallas CityPASS program.

The Dallas Holocaust and Human Rights Museum is dedicated to teaching the history of the Holocaust and advancing human rights to combat prejudice, hatred, and indifference. The museum’s introspective exhibits are grouped into three main exhibition spaces:

The Holocaust/Shoah Wing—Discover an incredible period in world history through a geographically oriented exhibition that leads visitors across Europe and back, from 1933 to 1945. The Holocaust/Shoah (Shoah is the Hebrew word for “catastrophe”) Wing explores the savagery of the Einsatzgruppen (Nazi Germany’s paramilitary death squads), their acts of individual murder and terror, followed by the events that culminated in the “Final Solution” and the industrialized killing of the Nazi death camps. Balanced poignantly against this horrific narrative are the stories of Upstanders, those who, when confronted with terrible inhumanity, chose to defend human rights. There are also testimonies of Holocaust survivors and liberators that personalize the visitors’ journey and give history a voice.

Human Rights Wing—Thought-provoking installations detail how the world has progressed since the Holocaust. Highlights include The International Military Tribunal at Nuremberg, where Nazi leaders faced charges of crimes against humanity and war crimes; The Universal Declaration of Human Rights, based on the four foundations of dignity, liberty, equality and brotherhood; and the Ten Stages of Genocide, where 10 monumental art installations depict historical and contemporary genocides.

Pivot to America Wing—This gallery is equal parts inspiration and participation. Through interactive kiosks, brief films, and remembrances, guests can explore the ideals of our nation and how we are learning to live up to them over time; learn that it is up to all of us to participate in the repair process to create the best America possible. Two of the most moving and informative exhibits are Piccadilly Cafeteria, where personal testimonies help you experience Dallas’ cafeteria sit-in for African American rights; and the Beyond Tolerance Theater, which inspires visitors to confront their own biases and consider new responses to them.

The Dallas Holocaust and Human Rights Museum is one of only two museums in the world to feature the Dimensions in Testimony Theater, which allows visitors to interact with survivors in perpetuity. Using high-definition recording, voice activation, and holographic imagery, Dimensions in Testimony was developed by the USC (University of Southern California) Shoah Foundation. It offers visitors the rare opportunity to sit across from a Holocaust survivor and ask them questions about their life and survival. Learn more by visiting DHHRM.org.

Dallas CityPASS tickets cost $49 U.S. for adults ($33 U.S. for children 3-12) and are valid for nine consecutive days, beginning with the first day of use. The tickets can be ordered online at CityPASS.com up to one year prior to a traveler’s planned vacation dates. Delivered within seconds to the buyer’s email address, the tickets can be conveniently stored on a traveler’s mobile device or Apple Wallet.

An added benefit for international travelers is that CityPASS mobile tickets are delivered in the language the buyer selected when they first entered the CityPASS website. For international travelers, it is especially accommodating to have an end-to-end translated experience in the language of their choosing (language options include Chinese, English, French, German, Italian, Japanese, Portuguese and Spanish). For more information, visit CityPASS.com.

About CityPASS: For 25 years, CityPASS tickets have been premier products for travelers who want to visit a destination’s top attractions while enjoying significant savings. Based on more than 76,000 customer reviews, the tickets have an average customer rating of 4.6 stars (out of a possible 5). CityPASS tickets are currently available in 15 North American destinations: Atlanta, Boston, Chicago, Dallas, Denver, Houston, New York City, Orlando, Philadelphia, San Diego, San Francisco, Seattle, Southern California, Tampa Bay and Toronto. To date, more than 24 million CityPASS tickets have been sold to savvy travelers. For more information, visit CityPASS.com.