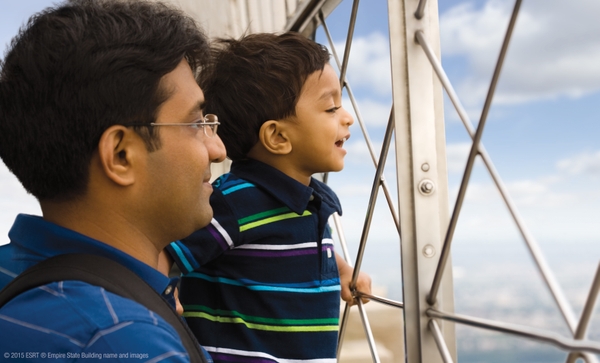 Victor, Idaho (May 23, 2012) — Fathers come in all shapes, sizes and personality types. Whether your dad’s a technology geek, a film buff, a thrill-seeker, or a cultural devotee, CityPASS® tickets can dish up an adventure to match—and save you up to half off the cost of making dad’s day special.

So, who’s your daddy?

“Head in the Clouds” Dad — He’s not an unrealistic dreamer, he just likes to have his head in the clouds—literally. He’s a sucker for engineering marvels like Toronto’s CN Tower and Seattle’s Space Needle. Put him on a high-speed elevator to the top of the Windy City’s 360 CHICAGO observatory or New York’s Top of the Rock or Empire State Building and he’s in heaven. He’s not even afraid to step onto “The Ledge,” Skydeck Chicago's 103rd-floor, all-glass viewing box, and stare straight down into the heart of Chicago.

The Science Geek — He was never too busy to help with your science fair projects or double-check your math homework. In fact, he loved it. So, rest assured, he’ll flip for the California Academy of Sciences in San Francisco, which boasts its very own rain forest; the American Museum of Natural History in New York, which was the setting for the hit movie Night at the Museum; and Space Center Houston, home of NASA’s Apollo-era Mission Control.

Pop-Culture Pop — Whether it’s music, film, food or art, he’s attracted to whatever moves the masses and defines an era. Put a little fizz in his Father’s Day with a visit to the World of Coca-Cola. At Seattle’s EMP Museum he can groove to exhibits covering a wide range of musical genres, including rock, soul and punk, and unleash his inner rock star in the EMP Sound Lab.

The History Professor — His TV is always tuned to the History Channel and his bookcases are bulging with biographies of famous people. If time travel were an option, he’d be first in line. Until that happens, brighten his day with a visit to Philadelphia’s National Constitution Center, an interactive museum honoring America’s Constitution; or spooky Eastern State Penitentiary (also in Philadelphia), a former prison whose Gothic façade once held the likes of mobster Al Capone. You can immerse dad in 18th century America with a visit to RevolutionaryBoston at the Old State House, located on the Freedom Trail. Or, take him on a cruise to the Statue of Liberty and Ellis Island.

Theme Park Thrill-Seeker — He’s a roller coaster-riding, churro-eating, parade-loving kid at heart. And you’ll be the favorite son or daughter if your Father’s Day gift is a Southern California CityPASS ticket. The ticket includes a 3-Day Disneyland Resort Park Hopper ticket that allows three days of back-and-forth admission to both Disneyland Park and Disney California Adventure Park, where Cars Land, a brand-new section of the park is opening on June 15—just in time for Father’s Day. This CityPASS ticket also includes one-day admissions to Universal Studios Hollywood, which will open Transformers: The Ride—3D later this week (May 25); and SeaWorld San Diego, whose new launch roller coaster, Manta, opens on May 26.

Renaissance Man — He’s not easily categorized. Sure, he likes theme parks, but he also appreciates art museums, aquariums, harbor tours, and sports. Luckily, CityPASS tickets cover a wide range of experiences in each destination. In Atlanta, for example, dad can go from exploring the Georgia Aquarium to an insider tour of CNN's global headquarters to enjoying “The Art of Golf” exhibit (ends June 24) at the High Museum of Art. In San Francisco, he can hop aboard one of the city’s iconic cable cars (seven days of unlimited rides are included with each CityPASS ticket) or cruise under the Golden Gate Bridge on a Blue & Gold Fleet Bay Cruise. And while Houston may be best known for its contributions to space exploration, a CityPASS ticket also gets dad an up-close look at the stellar collection at the Museum of Fine Arts, Houston.

For 15 years, CityPASS has been the premier product for travelers who want to visit a destination’s top attractions while enjoying significant savings of up to 50%. CityPASS, which has a 99% customer approval rating, is available for New York City, Atlanta, Boston, Chicago, Hollywood, Houston, Philadelphia, San Francisco, Seattle, Southern California and Toronto. For more information, visit CityPASS.com.